The eves went through some hours of anxious waiting before Sri Lanka ensured their passage to the Super Six stage of the ICC Women’s World Cup in India on Tuesday by dumping hosts India out of the competition.

The women from the Caribbean must have lost hope of progressing further after going down to defending champions England by six wickets earlier in the morning.

But since India suffered a huge defeat at the hands of Lanka later in the day, it was they who became one of the three teams to progress from Group A.

West Indies were bowled out for a paltry 101 in 36.4 overs against England, the second lowest total of this tournament after Pakistan’s 84 against Australia in a Group B fixture.

With just a small target to chase, England completed the formalities in 35 overs, a tad slower than expected.

But later in the evening the Sri Lankan women did them a favour by knocking India out of the Cup by recording an upset 138-run victory in a crucial Group A encounter. 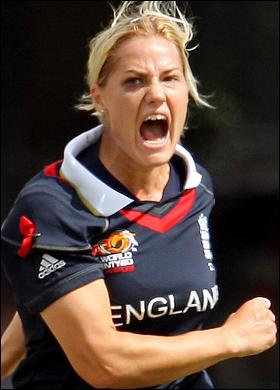 Chasing a challenging total of 283, the hosts put up a pathetic show to be bowled out for 144 in 42.2 overs at the Brabourne Stadium in Mumbai.

Although both India and West Indies finished with 2 points from three matches, the Islanders progressed on the basis of a better run rate. While India ended with a run rate of -0.433, the West Indians recorded a rate of +0.276.

The West Indies paid for a rather costly and surprising decision by skipper Merissa Aguilleira to bat first on a bowler-friendly track.

England bowlers were right on target with Anya Shrubsole registering her best figures of 4/21 and Arran Brindle scalping three wickets in her two overs to bowl out West Indies cheaply.

Deandra Dotttin was the pick of Windies bowlers  picking up 3/20. Dottin took the wickets of Arran Brindle (14) and Sarah Taylor (0), both dismissed leg-before, on the first two deliveries of her very first over to spark hopes of a West Indies comeback, but it was not to be.

Earlier, Shrubsole and bowling mainstay Katherine Brunt ensured that the Windies didn’t get their desired start — leaving them tottering at 14-4 at one stage — that got even worse with the early departures of Aguilleira, who was found short of the crease by a Jenny Gunn throw, at Dottin. Their dismissals left the Caribbeans gasping for breath, with the scoreboard reading 31/6 by the 15th over.

The harsh effects of being less well-off

Dynamic Airways to stick with Guyana no matter what