Job Satisfaction Not With Current Employer?

Millions of UK workers are ending 2018 feeling undervalued in their current workplace and are increasingly likely to be job-hunting on company time, according to figures released this week.

The second annual Job Satisfaction Index, released on 20 December by the leading online jobs board totaljobs, spoke to 15,687 employees about their workplace experiences in 2018. The figures suggest UK workplaces are being blighted by a growing trend of dissatisfaction amongst the nation’s workforce at a time where employers are finding it increasingly difficult to retain loyal, motivated talent.

Over two-thirds (69%) of workers say they have not had a pay-rise or promotion during 2018, a 1% increase on last year’s Index. Adding to this frustration, over half of workers (57%) say that they have not received any formal training, suggesting a lack of financial incentive is compounded by a sense that they are not acquiring new skills.

The research also indicates that these frustrations are making UK workers increasingly likely to explore their options. For example, 69% of workers say they ‘don’t see themselves’ in their current role in 12 months time, representing a 3% increase on December 2017.

Perhaps more striking is the growing trend of employees using company time to look for alternative roles, such is their frustration. Today’s figures show that 55% of employees admit looking for a new role during working hours, a marked increase on the 50% who admitted doing so in 2017. 69% of workers say they don’t feel their boss supported their career goals, a marginal increase from last year (68%).

In spite of the economic uncertainty caused by Brexit, it appears UK employees don’t believe they are ‘better the devil they know’ and are willing to roll the dice when it comes to their career going into 2019.

There is one silver lining for those UK workers planning on staying loyal into the New Year. The figures suggest there has been a small uplift in workers who feel their voice is being heard by senior management, with 31% of workers feeling they had their boss’ ear, compared to 29% in 2017. 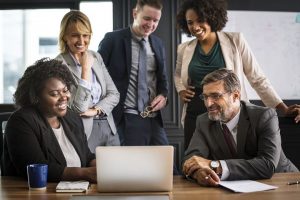 Delia Dolor is an all-round media professional. She produces and presents television, radio and live shows. She is also a public speaker, magazine and print editor. Delia has been credited with creating a more intimate confessional form of media communication and to have influenced the way talk shows in the Caribbean can influence the lives of others.

Maticoor Night at the Trinidad and Tobago Culture Fest in London

Investing In the Caribbean is “Good Business”