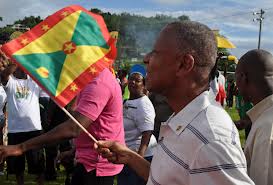 SALUTATIONS
Grenadian Patriots: We are here!!! We are here because he did it!!!
YES indeed, Kirani did it. Kirani won GOLD:-gold for Gun Battle; gold for Gouyave; gold for Grenada!
From bare feet to golden feet;
From age to age and stage to stage;
From the Fishing Capital of Gouyave to the highly cultured City of London;
From win to bigger win and victory to greater victory;
From World Champion to Olympic Champion;
From the great and immortal words of his Alma Mata, “The prize to the one who earns it; Let this be your golden rule”; to the noble and proud words of our National Anthem, “Hail Grenada land of ours”.
Today he stands draped majestically in the red, gold and green of our National Flag

Ladies and Gentlemen, today, our nation beams with unbridled pride and joy.  Yesterday, for the first time in our history as a nation, Grenada won a medal in the Olympic Games. Not only did we win a medal, but we won GOLD.

This precious gift was given to us by the young man known as the Jaguar, Kirani James.  In so doing, not only did he give us his best performance ever, but he became the first non- American in over 40 years to run the 400 metres in under 44 seconds.

We are proud because Grenada has given to the world a model youth. A young man who is worthy of his history; whose personal attributes and talent remain a bold and distinctive symbol; a shining example for all of our nation’s youth.

In the midst of difficult times for Grenada, the Caribbean region and in fact the entire world, shines a brilliant star…an athletic star!
Kirani James has demonstrated the power of his commitment to placing our country Grenada in the annals of Olympic history. This is an amazing achievement for Grenada. And in so doing, Kirani has challenged all of us to become beacons of light for the younger generations of this country.

In fact, as I dissected Kirani’s race today, I noticed a few things:

•    First, he paced himself well at the beginning of the race….he did not over extend himself because he knew that the race would be a long and tiring one and that he needed to conserve some energy for the sprint to the finish.

•    Second, he maintained his composure, stayed focus throughout the race and never lost sight of the ultimate objective to win.

•    Third, he pushed himself in that last 100 metres, fighting off the aching muscles and physical exhaustion that that must have consumed his body because he knew that the final push was necessary to win.

•    Fourth, he never took victory for granted, he ran his best to the very end of the race and enjoyed the ecstasy of placing first only when that had been firmly established.

•    Finally, he embraced his victory with maturity and grace, extending a hand to his opponents and congratulating them all.

On this final observation, I could not finish these brief remarks without expressing my profound admiration for Kirani and the gesture extended to Pictorius, the South African double amputee athlete who ran the semi- final heat with Kirani.

Rather than basking in his victory, young Kirani went up to Pictorius and invited him to exchange Bibs as a mark of respect and admiration. When interviewed subsequently, Kirani told the world of his admiration for Pictorius and pointed out that Pictorius was an inspiration for us all. This, ladies and Gentlemen is the conduct and soul of a humble, gracious and mature sportsman.
Today therefore, on behalf of the Government and People of Grenada, I extend our unmeasured congratulations and gratitude to Kirani. We thank you for emphatically placing us in the family of Olympic Medal Winners!

On behalf of the Government and people of Grenada, I wish to congratulate and thank Kirani’s parents for bringing up such an exceptional son.

I also extend gratitude to his coaching teams, past and present, for the fantastic job they have done in discovering Kirani’s talent and preparing him for the world stage.

Ladies and Gentlemen, while Kirani’s performance has been exceptional we MUST take this opportunity to congratulate and thank all our athletes taking part in the London Olympic Games. Your journey to these games has not only been a journey of personal sacrifice and commitment, but one of love and dedication to your dear homeland. You have made our country proud and for this we love, admire and thank you. 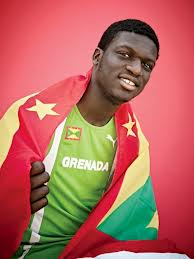 Ladies and Gentlemen, as the 400 metre finals unfolded, I could not help but reflect on the advancement of Grenada as a nation, and to draw the many parallels between Kirani’s remarkable accomplishment and the development of this country in one of most trying economic periods in global history.

Undeniably, we are facing challenging economic times. Jobs are not readily available and there is a disturbing sense of frustration over the length of time that we have experienced the impacts of the recession.

Ladies and Gentlemen, how do we as a Nation confront these harsh realities? We could complain and seek to blame others; we could deny the gains we have made and think we have not progressed; we could get upset and let our disappointment lead us to take desperate actions; or WE COULD DO AS KARANI HAS CHALLENGED US TO DO.

As a leader, I have also personally benefited from Kirani’s inspiring display of fortitude. I, more so than ever, understand and appreciate that leadership is not easy, and that as a leader I must make tough decisions and act in the best interests of the Nation.  I am determined to bring this country through these times with our dignity intact and equipped to take advantage of a better economic climate.

I have learnt that despite turbulence, some of which may be unexpected, that the Captain of the Ship must always steer the course, avoid distractions and berth the vessel safely in the harbour. This is my commitment to Grenada.

Ladies and Gentlemen, Fellow  Grenadian Patriots let use Kirani’s achievement as a source of inspiration to achieve the best we can be;  so that when the history of our country is written, it will show that we  gave of our best to achieve a strong , stable and prosperous democracy for our children and grandchildren. Let us put our shoulders to the wheel and begin “PRODUCING OUR WAY TO PROSPERITY”.

I THANK YOU ALL AND MAY GOD CONTINUE TO BLESS OUR NATION.