In West Indies Cricket news. Mahendra Singh Dhoni and Dwayne Bravo, the two captains of India and West Indies teams, are good friends thanks to their association with Indian Premier League outfit Chennai Super Kings (CSK). But their demeanour on and off the field are in sharp contrast.

Dhoni never lets emotion get the better of him. Beneath his calm exterior, Dhoni possesses a very sharp cricketing mind that enables him to lead from the front and helps him to get the best out of his team.

Bravo, on the other hand, is flamboyant and wears his ‘emotions’ on his sleeve. He excels in whatever he does on the field and is quite expressive too.

But both share one thing in common. They don’t take a backward step and give their 100 per cent on the field. The ‘two friends’ in the CSK squad now compete to outsmart each other in the three-match ODI series.

Bravo, who played for Mumbai Indians in the first three seasons of IPL, joined CSK in 2011. Playing under MSD, Bravo has been a consistent performer for the Chennai side and has emerged as one of Dhoni’s trump cards. Though Dhoni benefited from Bravo’s match-winning performances under him during IPL, he may not enjoy his West Indian counterpart repeating the same when they clash against each other. 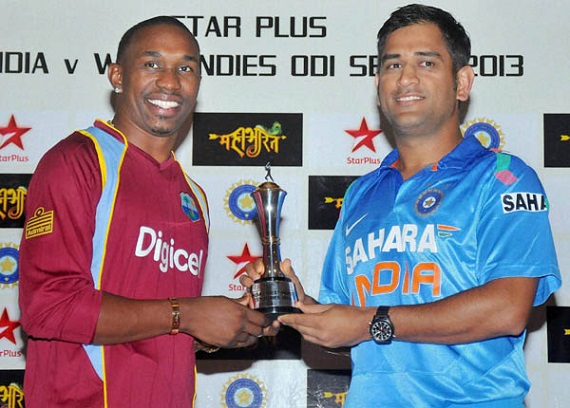 The mutual admiration they have for each other was quite evident at the press conference ahead of the first ODI in Kochi. “It’s strange to play together and it’s not strange to play against each other. Bravo has been very good for our IPL team. IPL is a wonderful opportunity where you look at different batsmen and different bowlers. At the same time you get to know what their strengths are if you are good enough to hide the weaknesses. Windies players are not just good players, they are fantastic human beings too and Bravo is one of them,” said the Indian skipper.

Bravo too is in awe of his CSK skipper and will be hoping to steal a trick or too from Dhoni’s bag to catch him off guard.”Friendship and mutual respect for each other always exists. MS (Dhoni) has been doing great service for Indian cricket as a skipper. But we are here to win. It will be a fighting series and I wouldn’t take a backward step” said Bravo.

Bravo, who treats Chennai as his second home, has acted in a dance number for a Tamil movie ‘Ula’. He even tweeted as “Chennai’s newest film star” on the sets of the movie.

So it is an interesting battle between ‘two friends’ now.

Grenadians for jobs in Royal Household