Caribbean news. CHILDREN as young as four years old have been treated for gonorrhoea, syphilis, herpes and HIV at the Bustamante Hospital for Children after being raped by close family members including their fathers.

So overwhelming is the number of cases seen at the hospital yearly that one doctor is speaking out in the hope that more will be done by both individuals and communities to protect the nation’s children, many of whom endure months and years of abuse before they are eventually rescued.

Dr Sandra A Knight, a general practitioner who has worked with the paediatric hospital in Kingston for the past 11 years, said more of these young patients are being brought in for sexually transmitted infections.

“The hospital sees several alleged sexual assault cases each year with the victims being anywhere from babies to 12 years old,” she told the Jamaica Observer.

Many of these children are usually not taken to the hospital until they start to experience symptoms associated with the vagina, penis or anus. 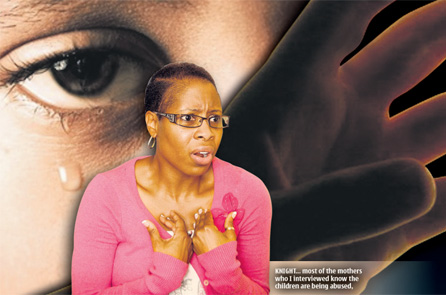 Dr Knight said she treats an average of eight such cases each year while some of her colleagues see up to 13 children annually at the hospital.

Recalling some of the most disturbing cases she has dealt with during her tenure at the hospital, Dr Knight said they continue to have a long-lasting impact on her, personally.

One which still traumatises her to this day is the case of a nine-year-old boy who was buggered by the pastor his mother left him with while she went to work.

Although the boy became withdrawn and lost his appetite, the buggery was not discovered until his teacher complained that he was defecating on himself while at school.

Dr Knight said when the mother took him to the hospital his penis was swollen and scarred and his anus torn.

“You could literally look up the child’s anus to the rectum,” Dr Knight said.

The child later revealed that the pastor had been raping him for some time and would give him $20 each time he had sex with him.

Another case she will never forget was that of an 18-month-old boy who died after being buggered by an uncle, two years ago.

“I saw that baby two days before he died,” a distraught Dr Knight said.

She recalled the day the near lifeless baby was brought to the hospital by his uncle and a pregnant girlfriend to be treated for a cold.

As she attempted to resuscitate the unconscious baby, she noticed his stomach was growing at an alarming pace.

“I was so busy resuscitating him that I didn’t immediately think of turning the child over and when I turned him over the anus was destroyed,” she said. “The uncle had raped the baby and when the penis went into the anus it tore off the colon (bowel) and the faeces started to run into the abdominal cavity,” she explained, adding that the baby had no chance of living.

In yet another case, Dr Knight said she treated a little girl who was infected with HIV, gonorrhoea, syphilis and herpes by an uncle who was in and out of prison.

It was, however, the last two patients that Dr Knight treated a week ago that pushed her to make public the plight of these children.

In these cases, a four and a six-year-old were infected with gonorrhoea which had began to seriously ravish their young bodies by the time they were diagnosed.

“What traumatised me about the situation is when I look at the vagina of these little girls (and pardon the graphicness of what I am saying) the hymen is ripped apart, they have sores, the older child we had to evaporate the room when we were finished because pus was coming from her vagina,” she said.

From the symptoms, Dr Knight said it would appear the girls would have been infected for weeks, however the younger one was only taken to the hospital after her mother noticed she was scratching her vagina while the older child had a smelly discharge. 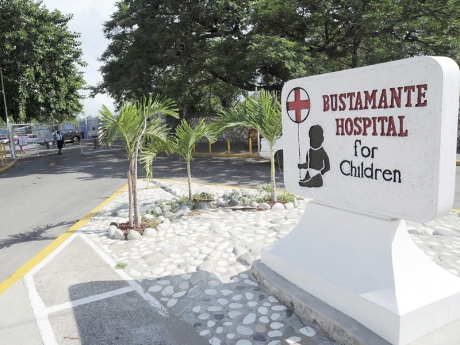 In both cases, Dr Knight said the children refused to say who the perpetrators were, although the younger one reported that her father was sleeping in her bed, while the mother told the police that he should have been sleeping on the floor. That father has since been arrested. However, there is still no arrest made in the case of the six-year-old.

During the medical examination of these young rape victims a swab (the size of a cotton bud) is used to take a sample from the vagina and this procedure, Dr Knight said, often causes children to scream out in pain.

“And I say to myself, if this swab is so painful for them,” [I can’t imagine] “what the experience must have been like for these children,” she said.

Once these children are found to have been sexually abused they are admitted at the hospital and are only discharged when a social worker gives the go ahead.

Knight said the doctors do not examine any child without an officer being present from the Centre for the Investigation of Sexual Offences and Child Abuse (CISOCA).

“Whenever a child comes in, CISOCA is called, and one officer will interview the family while another will remain with the doctor while the child is being examined,” she explained.

She said that in most cases the children are taken to the hospital by the mothers who sometimes have been aware that these children are being molested but feel powerless to act.

In a lot of the cases, Dr Knight, said these mothers were themselves raped as children.

“Most of the mothers who I interviewed know the children are being abused, but they are economically and physically disadvantaged because the man is going to beat them, and some even send out children for men to have sex with them,” she said.

One mother, Dr Knight said, admitted to her that she had a similar experience as a child and it did not affect her. “So the mentality is the child is going to be all right too,” said the doctor.

There is, however, the other end of the spectrum where there are distraught mothers who will even blame themselves for not having figured out what was going on.

Head of CISOCA, Superintendent Gladys Brown-Campbell, said she had no readily available statistics to indicate whether there has been an increase in the number of carnal abuse cases involving children, but said a lot of the offences, which were committed some time ago, are now being reported.

The multi-agency approach at CISOCA, which sees all the relevant State agencies such as the Child Development Agency and Office of the Children’s Registry operating under one roof, is said to make it easier for these young victims.

“Everyone is on board and so the child does not have to tell the story twice,” Brown-Campbell said.

According to Brown-Campbell, a lot of these children are being abused by relatives and close family friends.

“So be careful who you entrust your children to,” she warned, adding that this is often the reason why the sexual abuse is not discovered earlier.

While most of the cases she has dealt with involve persons from the lower socio-economic strata of society, Dr Knight suggested that this was so only because they are the persons who mostly access the public health system.

She also said that a lot of these children will not readily reveal the identity of the perpetrator as they find it difficult to consolidate the two ideas that the person who is supposed to love and protect them is the one hurting them.

“We had a three-year-old who it took hours for her to talk, and then she finally said “mi father say me nuffi talk,” Dr Knight said.

She explained that this is usually a confusing place for a child to be, as they often do not know what they are feeling at that time.

“When these little children grow up and realise that what happened was not supposed to happen, then they start to feel ashamed and this affects their self-esteem and values and they then engage in voluntary sex at a young age,” she said.

While the majority of rapes are committed by adults, there are those occasions when the sexual act is done by an older child.

Dr Knight cited a case that came to her attention only last week in which a mother brought in her 11-year-old son for treatment because he was beaten by a neighbour.

“I asked the mother why the neighbour beat the little boy and the boy said ….(name omitted) say me rape him son dem, but me neva rape dem, is go me go inna di room and see dem a f… and me join in,” Dr Knight said, adding that she was taken aback by how casually he expressed himself.

So traumatic are these and several other cases she has dealt with, that Dr Knight said it has begun to impact her and some of her colleagues personally, especially after the birth of her now six year-old daughter.

“It is difficult to see a four-year-old suffering like this, and so I get obsessive about who my daughter is staying with,” she said, adding that no one, regardless of social status, is safe from this demon.

The human sexual centre, she explained, is in the most primitive part of the brain and this is the area which is impacted least by what is called common sense and is instead controlled more by reflexes and urges.

According Dr Knight, it all comes down to the sexual indiscipline and the inability to control one’s urges.

Dr Knight said another of the driving forces which has led her to speak out about this scourge affecting society, is the many sexual dysfunctions among adults which can be traced back to their childhood

“A physician who is being divorced confided in me that he was sexually abused as a child and was having difficulty maintaining a relationship with a woman as he was sexually abused by a woman,” she said, explaining further that having grown up in a poor family he was sent to board at a lady’s house during his high school years and the lady took sex for rent.

As for the wheels of justice, Dr Knight is not convinced they are turning as fast as they should, as of all the cases she has treated over the years, she has only been called three times to be a witness in court, which could suggest that a lot of them do not get resolved.

She feels helpless at not having any one solution to the problem. However, she is hoping that by speaking out public awareness will be raised and responsible adults will be prompted to take action.

“My solutions are, one, to make society aware of the fact that they need to protect their children, and two, if you are a perpetrator you will be punished and lastly, to let everyone know that it is wrong to do this,” she said.

As for Jamaica having a sex offenders registry to alert communities to the identity of sex offenders, Knight does not believe this would work as smoothly in Jamaica as in the United States, because Jamaicans might not be mature enough to handle this because of the vigilante culture. Article courtesy http://www.jamaicaobserver.com