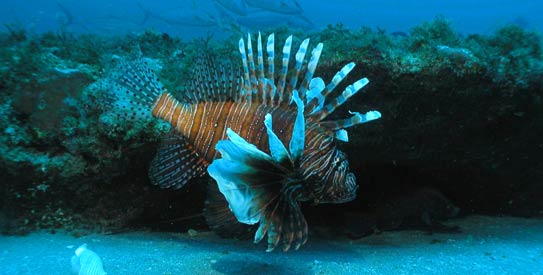 In this July 2006 file image released by NOAA Undersea Research Center, a lionfish swims at a depth of about 130 feet, roughly 55 miles off the coast of North Carolina. Conservationists in St. Maarten are warning islanders not to eat lionfish after tests found a naturally occurring toxin in the flesh of the candy-striped invasive species that is causing ecological damage across the region, officials said Thursday, Nov. 24, 2011. – AP Photo

Conservationists in St. Maarten are warning islanders not to eat lionfish after tests found a naturally occurring toxin in the flesh of the candy-striped invasive species, officials said Thursday.

The findings have dealt a blow to the tiny Dutch territory’s efforts to contain the spread of the venomous predator, a native of the Indian and Pacific oceans that has colonized large swaths of the region after a few apparently escaped a Florida fish tank in 1992.

Following the lead of other Caribbean islands, St. Maarten had hoped to promote the species as batter-fried or grilled delectables to slow their spread. They were found in the Dutch territory’s waters in July 2010 and have been multiplying and gobbling up native fish and crustaceans ever since. Lionfish were first detected in the Bahamas in 2004 and rapidly spread south into the warm waters of the Caribbean.

But Tadzio Bervoets, chief of St. Maarten’s Nature Foundation, said nearly half of the football-sized lionfish captured in local waters were found to have a biotoxin that can lead to ciguatera poisoning, a rarely fatal but growing menace that has long been known in the Caribbean, South Pacific, and warmer areas of the Indian Ocean.

Ciguatera poisoning is caused by eating some subtropical and tropical fish predators, including grouper, snapper and barracuda, which live by reefs and accumulate toxins through their diet. They accumulate the toxin in their flesh from eating smaller fish that graze on poisonous algae.

People who have eaten infected fish can experience abdominal pain, nausea, vomiting, diarrhea, tingling and numbness. Most patients recover in a few days. In rare, worst cases there is paralysis and even death.

No one has gotten sick from eating lionfish in St. Maarten, but the territory typically has more than a dozen cases of ciguatera poisoning each year from people eating barracuda and jacks.

St. Maarten’s waters have long suffered from high levels of ciguatoxin, so Bervoets said the test results on lionfish were not a complete surprise.
Nonetheless, he added that island officials “were very much hoping that the results were negative.”

“This means that we cannot safely promote lionfish as an edible species” in St. Maarten as officials are doing elsewhere, he said.

Across the Caribbean, governments and conservation groups have been sponsoring fishing tournaments, encouraging anglers to go after slow-swimming lionfish and marketing it to restaurants and diners, hoping to stave off an already severe crisis.

The US Food and Drug Administration have had no official reports of illness associated with the consumption of lionfish filets.

“But in endemic areas of ciguatera, toxins have been detected at levels exceeding FDA guidance and therefore could cause illness if consumed,” said FDA spokesman Douglas Karas. “The Virgin Islands is one of those areas.”

In recent months, the US agency has collected more than 186 lionfish from the waters around the US Virgin Islands and Puerto Rico. Of these, scientists have tested 74 fish to date, with 26 percent confirmed to contain ciguatoxins at levels exceeding FDA guidance, according to Karas.

William Coles, chief of environmental education with the US Virgin Islands Division of Fish and Wildlife, said the US territory’s fishermen know well where ciguatoxins accumulate and avoid catching fish in those endemic areas.

“So we have about the same level of concern with lionfish that we do with any other fish. But it’s still a major concern,” Coles said.

Across the region, it remains to be seen exactly how much impact fishing and marketing of lionfish can have. For now, it’s the only hope in sight.

Scientists are still researching what keeps lionfish in check back home in their native range even as they’re going gangbusters in the Caribbean, mostly untouched by the local sharks, moray eels and grouper.

Lionfish, which carry venom in a flowing mane of spines and can deliver painful stings, have also colonized swaths of the Eastern Seaboard.

Bervoets said he and his staff spend much of their free time hunting lionfish and encourage others to “hunt them and eradicate them in any which way they can.”

“They are definitely multiplying. That’s why it’s such a shame we can’t eat them here,” he said Thursday in a telephone interview from St. Maarten.

From Queens to Queans: Fall of the African Woman: Part lII

Caribbean Festivals: Second to none