JD Douglas’ ‘A Chatham Conservation’ has the critics talking

The brief was to create a piece of theatre to commemorate The Historic Dock Yard Chatham’s 150 years of Command of the ocean celebration. No one involved realised that a sensational piece of theatre was born. The play A Chatham Conservation is based on a fictional meeting between three men Oludah Equiano, the celebrated writer and abolitionist, William Cuffay, one of the leaders of the movement in England for Universal Suffrage, and leader of the tailor’s Union and Sir Charles Bullen, one of England’s foremost Navel and decorated sea heroes.

A Chatham Conversation, is set at Commissioner’s House at the Dock Yards. Commissioner Charles Bullen, has invited two leading voices and men with sway with a request. He wants them to persuade the striking workers to return to work. The Empire is at crisis, without the production of ships, England cannot rule the waves and hence, hold on to her Colonies. The play is set around the 1830s and 1840s.

Douglas’s play is cleverly written, drawing on historical events to explore issues including social injustice, and the right to voice unpopular and troublesome issues.  The three actors Merric Boyd, (son of the celebrated Australian painter Jamie Boyd) Errol Hines, who is better known for playing Hailie Selassie in Black Heroes In the Hall of Fame in the West End Production, and JD Douglas as Equiano kept the audience enthralled, with their performances. 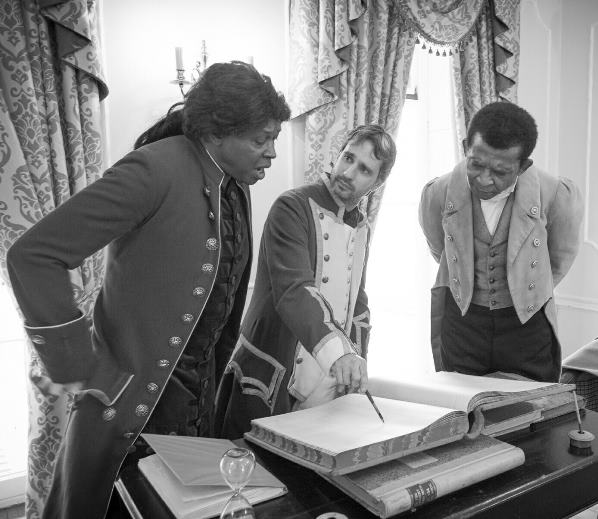 Actor Joseph Marcell a long time friend of the Writer, was in attendance on this press night. He seems most pleased with what he had seen. Jamaican veteran entertainer and Bob Marley MC, Count Prince Miller was also praising the production.

What Douglas was able to do is show how 150 years of Britain’s Command of the Ocean, involved a big helping hand from many of her colonies. Merric Boyd playing Bullen was the embodiment of English doggedness.

Admiral George Rodney and a hitherto unknown British Navel base in Pigeon Island, St. Lucia were fused into the narrative of Britain’s endeavour to rule the waves. The importance of  the island’s Castries harbour and the role that it played in the famous battle of the Saints was carefully explained. The Treaty of Paris which followed seventeen months later would see the French settling for the Caribbean islands of Guadalupe, Martinique and St. Lucia. The English got Canada and America got its independence. When Equiano enquired about the hapless diplomat Etinenne-Francois de Stainville duc de Choiseul, who negotiated the Paris Treaty that conceded so much territory against the interest of the French? In classic English stiff upper lip Bullen replies, “He probably named a village after himself and two centuries later the people would not have a clue how they got the name Choiseul.” A joke that was enjoyed by those who got it. Part of the audience attention to the action on stage was due to unexpected  humour throughout the play. Serious topics were punctuated with wit and inverted sarcasm.

With a title like A Chatham Conversation, local events, and personnel are referenced, in informative and matter of fact dialogue. At one point Commissioner Charles Bullen accuses Charles Dickens of writing into folklore some of the most unsavoury Chatham characters including the Artful Dodger.  In defence of Dickens, Equiano maintains that a writer is informed by what he sees, what vibrates his senses and what motivates him to action.  A dialogue on freedom of expression, self editing of one’s thoughts ensues, in a play that opens many a Pandora’s box. The fact that the recent American election results demonstrate that many people can say one thing and do the opposite, proves there are never final thoughts and actions.

The three actors were able to create an ensemble performance, which the play needed. Merric Boyd playing a character much older than his age, compensated with authority and statesman like delivery. His Bullen was relentless and steadfast in holding off his adversaries, and one to watch.

Errol Hines, brought a hitherto unknown character in William Cuffay to life. Cuffay was a thorn in the authorities’ side and was finally deported to Tasmania. Hines’ portrayal gives a good indication as to why.

JD Douglas stepped in to replace the actor previously in the role.  With full on dark powder and African voice, his Equiano was more than convincing and studied. He obviously knew the nuances of his script, as his comments brought laughter and guffaws. However one can’t help but feel that the script was the star and the three actors played their supporting roles brilliantly.  This is a clever piece of work, on many levels from idea to plot to characters to language. And that is why like many of the ships built in Chatham Dockyards where it is set, A Chatham Conversation will travel very far indeed.

The Commonwealth: What’s in it for small states?