Washington, DC, March 8……Antigua and Barbuda yesterday withdrew from participation in the second preparatory meeting for the Summit of the Americas scheduled to be held in Lima, Peru in April.

He noted that, at the meeting, the government of Venezuela was excluded from participation without any prior explanation or discussion by the member-states of the OAS at any level.

Ambassador Sanders said that “Venezuela’s exclusion from the second preparatory meeting was curious because it had been a full and constructive participant in the first meeting a few weeks ago”.

The only reason given for Venezuela’s exclusion was that Peru, the host country for the summit, had decided that Venezuela should not be allowed to participate.

According to Ambassador Sanders, “While the host country traditionally has been able to invite attendance by a high representative of a county that is not a member state, it is not acceptable to reject a sitting member-state of the Organization which plans and executes the meeting”.

“I want to make it clear that our stand is on behalf of all member states, not Venezuela alone.  If this is allowed to occur, then any member state of the OAS could be excluded from a Summit meeting or a general assembly meeting at the sole behest of the host country”. 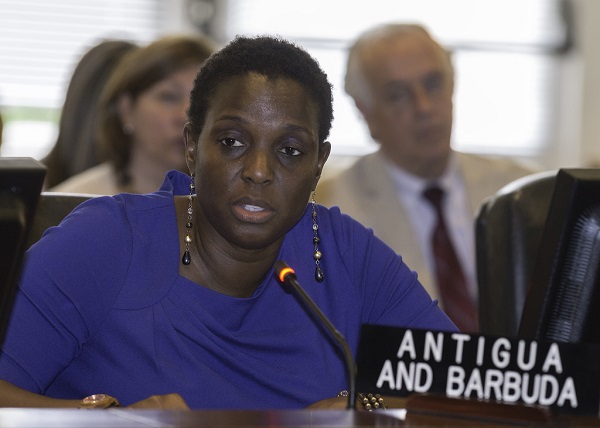 Consequently, Antigua and Barbuda’s Deputy Head of Mission to the OAS, Joy-Dee Davis, made the following statement before withdrawing from the meeting yesterday.

“Antigua and Barbuda does not know of, nor has it participated in, any official decision of the Summit of the Americas, the OAS General Assembly, the Meeting of Consultation of Foreign Affairs or of the Permanent Council to disenfranchise any active Member State from these meetings. We find this precedent of unilateral exclusion appalling and unacceptable.

Therefore, on that basis and until this situation is rectified, Antigua and Barbuda regrets that it cannot participate in the meeting.”