The lawyer for a Brazilian man who plunged into the ocean from a Royal Caribbean cruise ship early Friday morning claims his client fell into the water after crew members made anti-gay remarks.

Royal Caribbean had claimed 35-year-old Bernardo Albaz intentionally jumped off the Oasis of the Sea ship and a video showed him clinging to a lifeboat for about a minute before falling into the sea.

An attorney for the family said the missing man ‘did not jump’ and ‘it was not a suicide’, but that Albaz did have an altercation with Royal Caribbean staff after an incident at one of the ship’s bars.

Mike Winkleman said Albaz and his husband Eric were married a year ago and there were multiple occasions when anti-gay remarks like ‘Hi, lipstick’ were directed at the legally-married gay couple.

Albaz was at a ship bar when an anti-gay comment sent him over the edge, NBC Miami reported.

Winkleman said: ‘Bernardo ended up getting in a huge altercation and ended up in his cabin where he was furious and ultimately Royal Caribbean security came to the scene. 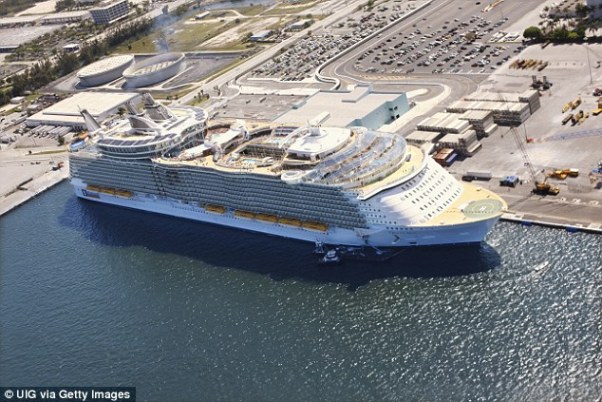 The incident happened on the Oasis of the Seas cruise ship, which is owned by Royal Caribbean (seen in port)

‘As a result of the altercation in his cabin Bernardo falls off his balcony onto the life boat area.’

The video posted on YouTube appeared to show passengers on the ship calling to a man in shorts [Albaz] holding on to a lifeboat support bracket, as the ship moved swiftly through the sea at night.

‘Because of you, this happened … Let go of me! Get off of me!’ he shouted in English, before seeming to lose his grip and fall into the ocean out of view.

According to Winkleman, Albaz’s husband Eric could be heard screaming at the security guards in the clip.

Royal Caribbean issued a statement saying that crew members saw Albaz ‘intentionally going over the side of the ship.’

The company has also addressed Winkleman’s claims about what happened in the cabin.

The cruise line said: ‘Our onboard security team responded to the guest’s stateroom after a neighboring guest complained about a domestic dispute on the guest’s balcony.

‘Our staff did not have a physical altercation with the guest and were unable to prevent his jumping from the stateroom balcony.

‘Royal Caribbean is deeply saddened by this event.

‘We will continue to provide assistance to the family as well as law enforcement.’

The US Coast Guard said on Saturday it had suspended its hunt for Albaz after a search by two boats and airplane and helicopter crews throughout Friday covered 931 nautical square miles.

‘We would like to extend our deepest condolences to the loved ones and all that have been affected by this tragedy,’ said Captain Todd Coggeshall, the chief of response management for the Coast Guard 7th District.

For confidential help, call the National Suicide Prevention Lifeline at

Chief Minister of Anguilla Mr Hubert Hughes is in London